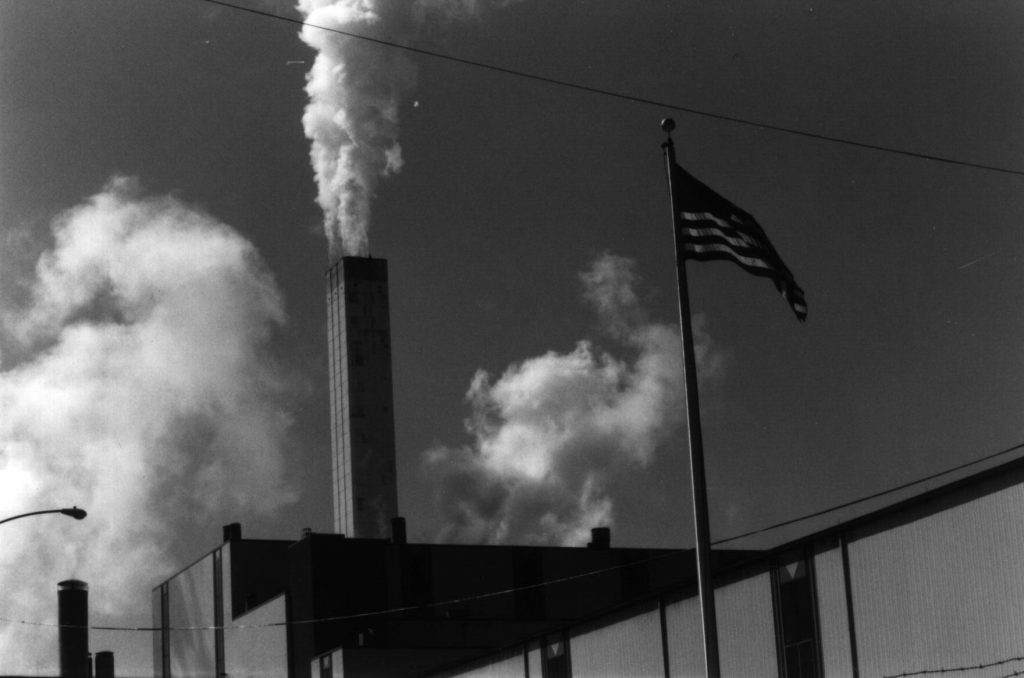 Covanta operates the largest trash incinerator in the U.S. in Chester, PA and is located on the Delaware River and Highland Avenue. The incinerator burns municipal solid waste to generate electricity and handles 1.2 million tons of garbage per year. The trash is sourced from Delaware County, Philadelphia, New Jersey all the way up to New York City.

Often rebranded as ‘waste-to-energy’, ‘energy from waste”, or “resource recovery”, trash incineration is the most polluting way to manage waste or to make energy. It is a public relations spin to gussy up a very dirty and inefficient industry. The facility processes up to 3,510 tons of waste per day, and at maximum output, generates approximately 90 megawatts of electricity. The toxic ash that remains after the trash is burned is then hauled to Rolling Hills landfill in Berks County.

History of Trash Incineration in Chester

Like many post-industrial cities in the United States, Chester’s decline post-war was a result of many major industries closing, as well as deep political corruption and systemic racism that encouraged separatism and “white-flight”.

After the civil rights protests in the 1960’s to end to de-facto segregation of Chester schools, housing and businesses, white population began to plummet, as black population increased. Demographics in the 70’s-80’s demonstrate the transition and stark color divide between black and white populations in Delaware County.  By 1990, the census reported that about 60% of residents were Black, 25% living below the poverty line and 20% were unemployed.

In the 1980’s, investors began looking at Chester as the optimal location for toxic and hazardous waste treatment facilities as the state’s landfills neared capacity, and governments began looking for alternative solutions to deal with the mounting trash problem. A Pittsburgh investment company known as Russell, Rea & Zappala (now Gomulka) saw the opportunity of a vulnerable town and began to buy up abandoned lots in Chester and build waste treatment facilities throughout the 1980’s.

In 1988, the PA Department of Environmental Protection granted a permit for a  waste incineration facility. The facility Westinghouse promised 110 jobs and $2.7 million in revenue to the Chester City Council through taxes and fees. In 1991, Westinghouse opened a trash to steam plant in Chester that brought in trucks from Delaware, New Jersey, New York, Ohio and Pennsylvania. The energy produced from the “trash to steam” facility was sold to the city of Atlantic City, NJ.

In order to deliver garbage to the incinerator, over 350 18-wheel trucks drove down the residential Thurlow Street every day starting at 4 am. Chester residents complained about the noise and dust associated with the constant stream of trucks. The traffic made it dangerous for children to play in front of their homes and the garbage from the trucks brought rats, strange powder residues and awful smells.In 1992, Chester Mayor Barbara-Bohannan Shepherd called a town meeting of Chester residents, government officials, industry representatives, DEP and EPA to host a meeting associated with complaints regarding Westinghouse.

Residents feeling that their voices were falling on deaf ears started a formal citizen advocacy group: Chester Residents Concerned for Quality Living.  CRCQL led a series of protests and blockades at the incinerator and at the county seat in Media from 1992-’93. Westinghouse responded to the actions by building a new access road for trucks as well as paying a $356,000 penalty for pollution violations during that period.

In 1995 a new medical waste treatment facility Thermal Pure opened followed by the plans to operate a contaminated soil processing facility near the active trash incinerator. The PA Dept. of Environmental Protection continued to grant permits for waste treatment and other toxic industries to operate within a cluster of 4 miles next to a densely populated low-income neighborhood. In response, CRCQL filed a complaint in Federal Court in Pennsylvania accusing the state’s Department of Environmental Protection of racial discrimination. The legal action gained national attention as it was the first environmental racism lawsuit filed in the U.S. Over the next two years, the case wound its way through the appeals process until the Supreme Court declared that the case against the state’s DEP to be moot, as the specific reason for the suit, Soil Reclamation Services, which was granted permission from the state to operate, was denied their operation permit while the case was in appeals.

In 2017, according to data reported to the state DEP on industrial sources of air pollution,

A study in 2005 found that children in Chester have asthma rates FIVE TIMES (5x) the national average, and rate of childhood asthma hospitalization in Chester is 3x the rate for Pennsylvania, and double the rate for the rest of Delaware County. (2010 census data from The Asthma Program, PA Dept. of Health- Data provided by Pennsylvania Health Care Cost Containment Council).

As for its neighbor, Philly is ranked the 4th worst place in the nation for asthma suffers, according to Asthma and Allergy Foundation of America. The report singles out the city of brother love as an example where poverty, poor air quality, and lack of access to healthcare specialists combine to harm asthma sufferers, especially children. It states that “low-income minority children have some of the highest asthma rates of any group in the U.S.” The report also defines asthma as one of the most costly diseases- with an estimated annual cost to society of $82 billion nationally, which breaks down to $349 million per year for Philly. (see EJN- Phila testimony document for sources).

The Chester Risk Assessment Project, part of an initiative by the U.S. Environmental Protection Agency Region III and agencies of the Commonwealth of Pennsylvania conducted a study of the environmental risks, health and regulatory issues in Chester in 1994, a few years after the first waste treatment facilities were opened.

Delaware County recently received an “F” grade from the American Lung Association for smog in their 2019 State of the Air report.  Philadelphia metro area was ranked the 4th worst place for asthma by the Asthma and Allergy Foundation. Philadelphia has the highest cancer rate of any major city in the U.S.

🦃 Happy Thanksgiving! We know not everyone cel

🗓 Mark your calendars for Nov. 17 PUC public he

There’s one of our C4 volunteers representing CRCQL at COP27! So proud of you Anna!