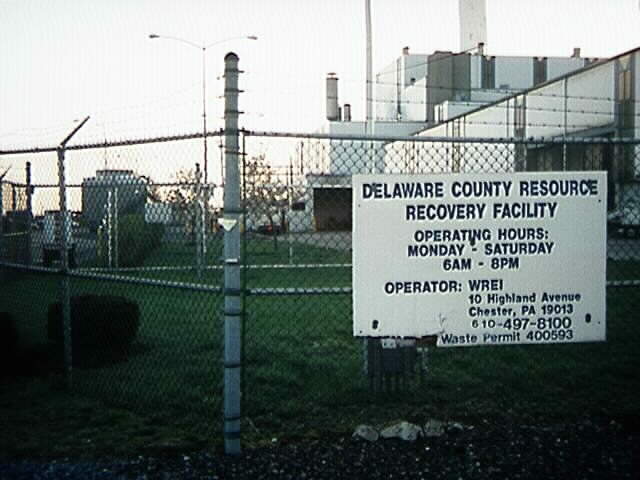 Chester, Pennsylvania is a small city south of Philadelphia and located in Delaware County. The city spans 6.1 square miles with 34,000 residents, and is also home to the largest trash incinerator in the country (Covanta), a sewage waste treatment facility and sludge incinerator (DELCORA), chemical manufacturing plants, and other polluting industries.

Over a century of systemic racism and political corruption has transformed the historic waterfront city on the Delaware River into a toxic regional waste hub and ONE OF THE WORST CASES OF ENVIRONMENTAL RACISM IN THE U.S.

Polluting industries have led to devastating consequences on community health and quality of life for the majority low-income black and brown community that lives in Chester.  Incinerators and toxic companies target low-income areas and communities of color because they are seen as the path of least resistance.

Covanta Delaware Valley, in the City of Chester, Pennsylvania, is the nation’s largest trash incinerator, burning up to 3,510 tons of municipal and industrial waste every day. They’re the largest air polluter in Chester City and one of the top few air polluters in the 7-county Philadelphia region. They operate without two of the four pollution control devices common to trash incinerators. Trash incineration, even with all of the normal pollution controls, is more polluting than coal power plants, and is worse than landfilling the waste directly. When burning trash, 30% of it becomes toxic ash that makes landfills more dangerous to groundwater. The other 70% becomes air pollution. The toxic ash from Covanta Delaware Valley is dumped in the Delaware County Solid Waste Authority’s Rolling Hills Landfill in Berks County, PA.

Covanta Delaware Valley has accepted waste from 21 Pennsylvania counties, 14 other states (as far as Oklahoma), Puerto Rico, and Canada. In 2020, they burned an average of 3,391 tons/day, with 31% coming from Philadelphia, another 31% from Delaware County, 17% from DE (most/all of which is rerouted Manhattan trash trains that go through Chester on train, then is transloaded onto trucks in Wilmington to be trucked back into Chester), 16% from NJ, another 4% from NY, 1.6% from MD (all or nearly all from Ocean City), and less than 1% from 4 other PA counties plus NC and VA. Just about 1.8% of the total is Chester City’s trash. Learn more about Covanta’s waste contracts.

In December 2020, Covanta was interviewed online and we commented on the Facebook livestream. Covanta responded in a 13-page piece full of misinformation. You can find our rebuttal here. Our initial comments are in black bold font, Covanta’s responses are in unbolded bullet points, and our responses to their responses are in bold red font.

🏭🏭🏭 The city of Chester houses many toxic

Thank you to everyone who came out to make the Che

Bring your kids, friends, nieces, and nephews out

The Climate Justice Initiative uses the power of p

This audio is from our chairperson Zulene speaking

Many people turn a blind eye to the condition of

These toxic industries always come with the same s

Funny, but not funny. Why would they even propose

We want everyone to get used to hearing the term L

Do we notice a pattern here? These toxic industrie

This stuff is HAZARDOUS! We do not need another to

🤢🤢🤢How many more toxic industries can the

🚩🚩🚩There are some serious red flags in Co

She’s a 10 but thinks incineration is better than landfills